This year’s conference was themed “Location, Location, Location” – a phrase that made a lot more sense to me once someone explained that it is also a reference to a popular televisual programme (m’lud).

But enough of my inadequate grasp of Popular Culture – what sort of ideas does this expression encompass?

As you might have guessed, there was exploration of the idea that E-learning can overcome geographical and temporal constraints on learning – i.e. no longer having to be at a specific place (say a Lecture Theatre) at a specific time (say 9am on a Monday) in order to “learn”.

Additionally, there were several strands on the use of mobile devices – either as a way of allowing complete freedom in a learner’s choice of study location; or as a way of transferring the learning site to somewhere more appropriate (for example, we saw the case of urban planning students walking around a neighbourhood being prompted with historical facts and videos about the buildings they were looking at).

This last example highlights an increasingly popular theme – the creation of apps using the GPS functionality of modern phones to give users content, based not only on who they are, but where they are.

Was it all research seminars and seriousness? Well, mostly, of course :), but we also took the chance to catch up / exchange ideas with e-learning friends & colleagues from around the country – and indeed, closer to home, we’re planning to see a lot more of our friends from Middlesbrough College in future.

Obviously, Blackboard Inc and our other suppliers were well represented and we took the opportunity to discuss current issues and upcoming product releases. In particular, we saw a demo of Mobile Learn – an add-on which would make our Blackboard site available on mobile devices. It works for a range of devices (iPhone, iPad, Blackberry, Symbian, Palm, Android) and certainly looks good, the only unfortunate issue being that it costs a bit.. 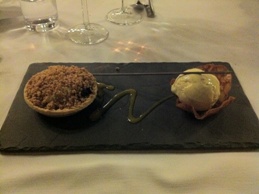 The food, as usual, was top notch – although I tried my absolute hardest not to overdo it ….

Right – enough of the intro – a quick overview of some of the sessions ….

Carl’s recent work has concentrated on exploiting the various ways that computer-based modelling can be used in the design, construction and generation of learning environments. One of my favourites was the glasses worn by motor mechanics. These allowed you to see the world around you (in particular the car engine you are working on), but overlaid your vision with instructions on how to carry out your task, for example by highlighting where to unbolt a panel or which component to remove. Personally, as a person with woefully inadequate “man skills”, this would seem like a fantastic move forward ..

He then went on to show us more examples of his work modelling the ruined abbeys of North Yorkshire.

We saw some research showing how our sense of location is almost entirely governed by what we see. A subject had his vision replaced with images streamed from a pair of cameras attached to the head of another person. The subject was soon reacting to stimuli and events occurring to the person with the cameras as if they were happening directly to himself.

Putting all this together – the suggestion is that since a) we can now model reality in such convincing detail and since b) our perception of reality is based so strongly on what we see – does it matter if we don’t all congregate to learn in the same location, since we have the capability to artificially “create” any location we want? Food for thought anyway ..

Clearly – a laudable goal, and being as I was (20+ years ago), exactly that first year undergrad physics student that this project was aimed at – I wasn’t going to miss this.

First year undergraduate physics students arrive at Durham with a wide range of skill levels when it comes to experimental technique. Some students have a comprehensive grounding in experimentation, some only an outline. Some of this disparity is due to resourcing issues in schools; some of it is due to changes in A-level syllabi. The challenge is to bring them all up to the same standard within the contraint of a single three hour lab session per week.

An obvious solution is to provide some way in which students can “practice” using the equipment outside of their three hours of lab time per week.

Several options were considered, but rejected: videos (ok, but were “transmission learning” only) and coded simulation (lacked reality).

They decided on highly interactive videos which allowed students to make choices and showed them the consequences of those choices. Using semi-professional equipment, they took many, many still photographs of different choices and outcomes, which they joined together using flash, to make an interactive movie.

Typically, these movies give practice using the tools of experimentation, rather than the experiments themselves; for example, callipers, oscilloscopes or interferometers.

Initial student feedback has shown that students who used these interactive screen experiments felt more “at ease” and showed “more understanding” of the main experiment when it came to their time in the lab. There was a reduced need for staff explanations, which made initial meetings with students more about discussion than about transmission.

Could these screen experiments ever replace the need for physical lab time? Definitely not is the view, their place is very much only as part of a blended approach.

So, would these tools have persuaded me to keep on with physics rather than transfer to computer science? Well no, probably not – I always liked experiments – it was the maths that I just couldn’t hack ….

Mike summarised the results of their survey to answer the question : “How keen are students to use mobile technologies for learning?”

How prevalent is mobile technology in the student community? Mike found that only the smallest handful of students didn’t own a mobile device (phone, pda, netbook or laptop) that could access the internet. Depending on institution, between half and 90% of students owned the latest model of these technologies.

Given this prevalence, they investigated at what level students are using these mobile technologies? As you might expect, most users were happiest using their device for browsing, reading or communicating (email, phone, txt).

Did students see any use for mobile devices as part of their learning? Well yes, they liked the idea of timetable information, grades & feedback being made available along with accessing their VLE.

Students weren’t turned on by the idea of using their devices to interact with their learning – say asking questions by txt or subscribing to RSS feeds. Perhaps, though, this is our problem and highlights a need for us to convince students of the value of such activities?

This is only the briefest summary of course. If you’re interested, you can contact Mike for the full report. 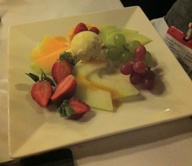 His themes revolved around mobile devices “overcoming location” with reference to his work increasing the reach of these devices in Kenya, Cambodia and the Traveller community.

He also spoke about “exploiting location”, highlighting the example of Mobile Oxford – a phone app that mashes up external and university data to provide new students with location dependent information – for example, walking directions to the nearest library holding a copy of a particular book.

He went on to make the case for mobile devices allowing us all to “work time” more efficiently by facilitating instant communication and freeing us from the rigid schedule which necessarily has to be planned a “long” time in advance.

In a similar way to other institutions, Durham has developed a mobile app which can give location sensitive information to students on campus – for example, number of available PCs in labs, campus maps, proximity of friends etc.

Interestingly (at least to my inner geek), location resolution is not by GPS co-ordinates, but extrapolated from the MAC addresses of the visible wireless hotspots, the known location of these hotspots and their received signal strength.

Content is tagged (that’s the folksonomy bit) based on location and presented to the user based on relevance as the user moves around campus.

Finally, finally, it wouldn’t be right not to mention the presentation by our own Jen Gutridge on the work being carried out by the Workforce Development Team in SSS&L developing Policing modules for delivery by distance learning.

The interest of the audience was engaged from early on in the topics raised by the presentation; and afterwards, Jen was besieged by so many people walking up to ask questions, we had to leave her to it or risk missing out on the cream buns!