At the LTE conference held at Teesside University on March 7th 2019, the Digital Learning Team shared some Practice-based Exemplars of Effective use of Microsoft Teams in Learning and Teaching.

The exemplars were well received and sparked some discussion among participants on how Teams could be meaningfully used and embedded within modules.

Microsoft Teams can be used by anyone within Teesside University using their staff or student credentials.  A team has various features to help manage any project or group activity.  This includes a default General conversation area (or channel) where the whole group can post messages and share files.  In addition to the General channel, more channels can be created for discussion and resource sharing on particular topics.  A real advantage to working with Teams is the ability to collaborate synchronously with team members on Word, Excel or PowerPoint files uploaded to the team.  This saves uploading updated versions as everything is automatically saved.

In the session we explored these features with the following four exemplars:

Robert Hughes (Nursing) created a team for the whole module initially as a social hub to quickly share personal introductions. On the Digital Development Programme one of the tasks was to  create a Sway presentation. Robert created a personal introduction to himself and his family for this Sway task. He then used this Sway presentation ‘Me and my family’ as an ice breaker activity by sharing it on the team and encouraged students to do the same.

Many of the students chose to follow Robert’s example and introduced themselves through a Sway presentation shared through the module team.

As the module progressed students began to use the team General channel to share resources used within class.

In this module, students had to work together on a group project. To facilitate their activities, Ben (English) created a separate team, each one consisting of about 4 or 5 students. The students used their teams to coordinate their activities, motivate each other and essentially keep the projects going.

This example shows the students having a quick chat about what they have done, and other students making suggestions.  Other interesting aspects were the use of animated GIFs to correspond with each other, the sharing of useful web links, and general encouragement for each other in the group.

Charles Tait and Michael Hall (Design) used Teams to get their students thinking about how to keep information regarding a particular project. In this example, it was developing a marketing strategy for a chocolate cake. Whilst the students used a face-to-face approach, they made great use of the team to keep a record of the day’s activities. 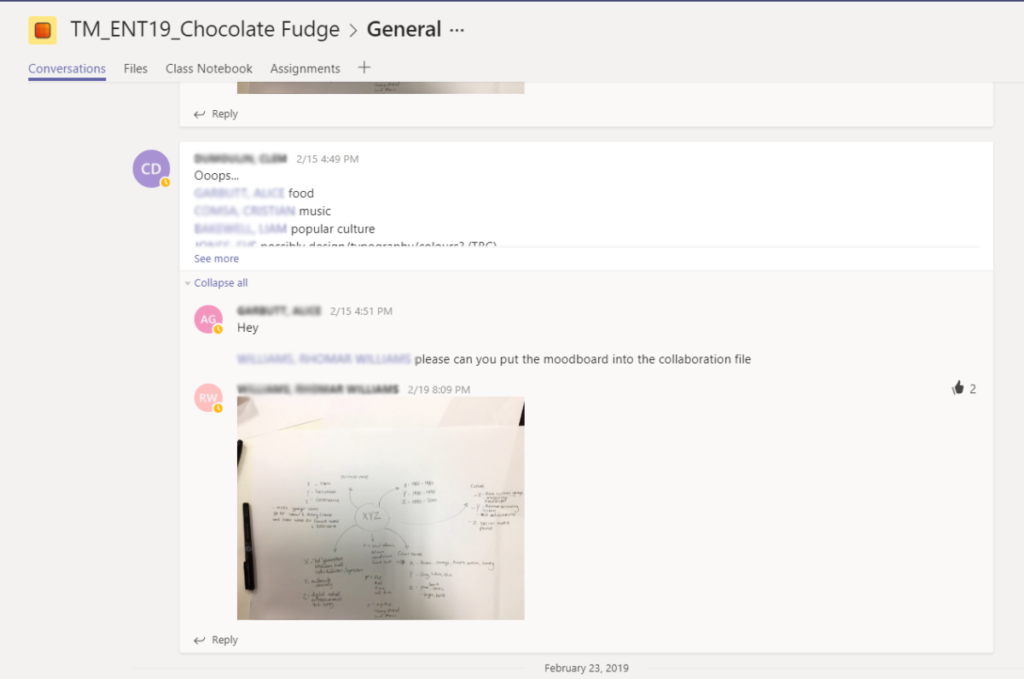 Example of students recording their face to face project work activity through their group work team.
One student asked another student in the Team to share a photo of the mood board. When the board was uploaded, it can be seen that this was then “liked”. Using the “Like” feature in the conversation area is a great way to build interaction into a team, and replicates typical social media activity.

In this module (Biological Methods) students were tasked with working in teams to solve a biologically relevant problem.  A large cohort of 125 students used a module based Teams as a platform to collaborate and communicate for their group project.

The general channel and conversation tab was used for ice breaker activities and for sharing useful resources amongst the cohort.  A separate channel for asking questions to staff was also created and was actively used by the students.

24 groups were set up as separate channels. Each group channel used their both conversation and files area to develop the problem-based learning activity.

Once the work was complete the evidence was collated and saved out of the team to be uploaded to an assignment in the module Blackboard site.

If you would like to use Teams in your practice and require help with this or anything else in the Future Facing Learning toolkit, please get in touch with a Digital Learning Developer via email.
Practice-based Exemplars of Microsoft Teams