Those of you who follow me on Twitter (and frankly if you don’t, you really should – I’m a delight!) will know that in my recent visit to the School of Health and Social Care, I got a bit lost and stumbled across this in a dark corridor… 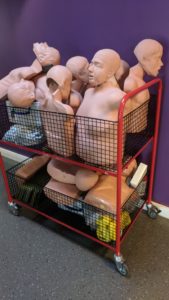 It was pointed out to me that this was all very Westworld, and that in turn got me thinking a little about role-play and simulation. Not the murdery kind like on the show, but rather the educational kind at university.

Despite the mannequin-based horror show in the School of Health, most of us don’t have access to robots or fake humans. In the show, the ‘hosts’ are programmed to act and speak following a script, to create an immersive environment to play in. This is harder in HE – the ethics alone of creating new life in the robotics lab are prohibitive… Therefore virtual worlds can be used to provide unique opportunities to conduct activities and create spaces where the user can control their own avatar (character) within it. The user can do this while interacting with other users from across the world. A virtual world is often a cheaper option when compared to undertaking the same scenario in the ‘real world’. The challenge is always to find the platform that will allow the user to become immersed in the role-play whilst allowing the educator to establish and control the learning scenario. Since I’ve always loved playing video games, and find it a great way to relax and unwind, I’ve often tried to figure out if any of the games I play can be used to create a role-playing, immersive environment in my teaching. Open world games have the most potential for this, and I’ve had discussions about how we could use everything from GTA5 through to Far Cry – albeit with varying degrees of success. The Assassin’s Creed games combine freedom of choice with historical context which could lend itself to an archaeology teaching session – and interestingly the latest release (Origins, set in ancient Egypt) has a non-violent historical/educational mode for just this. Ultimately these conversations tend to conclude that such games do not tick the boxes for what we need educationally.

This is not to say that all options are doomed. For example, Second Life has been successfully utilized for virtual crime scene reconstruction (Ma et al 2010), and each user is able to participate by playing a specific role. These settings not only allow for students to partake in scenarios providing a realistic experience that would normally be inaccessible, but they also allow for an increase in the scale of the setting. When used in an educational context, Second Life can readily facilitate realistic role-play situations. I’ve written before about our experiences in using Second Life. We used it to allow our students to role-play a large-scale forensic archaeological investigation and excavation. Role-playing sessions have been noted as being of great long-term benefit to the student (Finn et al., 2010), and have been shown to develop teamwork skills and inter-professional learning (Bradley, 2006). Further in my field, work with students and practitioners of forensic anthropology has vividly demonstrated the impact of contextual information and cues on the results of skeletal analyses that are undertaken (Nakhaeizadeh et al, 2014), which can only be gained through some degree of role-play. When we ran our sessions around a dozen students were in-world at once, and each had chosen a practitioner role to play. We decided this weeks before so that the student could look over the recommended reading for that particular role in an attempt to allow for more realistic and appropriate decision-making. During the simulation, the students ran and performed the excavation. We staff acted as the various senior roles, such as the SIO or forensic pathologist. We also played the nosy media too. And because it is a virtual world, colleagues from around the country joined in to give the students the benefit of their expertise.

It actually worked quite well, but logistically was extremely challenging and took weeks to set-up. We spent ages, for example, figuring out what sounds to have playing in the background to add an extra layer of realism. In retrospect some aspects of this weren’t dissimilar to the set-up in Westworld, where the visitors initially become over-excited once they enter the simulation (on the show this tends to lead to an immediate expression of consequence-free sex and/or violence, whereas in our Second Life teaching it tended to be less dramatic dance numbers…). All the while a large team of technical support was frantically working to keep the simulation running in the background.

Logistically the difficulty with trying to do something constructive in a virtual world is finding a platform that will allow all of our students to join at the same time. This, combined with the need to create a flexible (but discipline-specific) scenario, is the key reason why video games tend not to work well. Recently we’ve started to explore the use of Minecraft, although this is less for role-play per se and more for simulation of real-world activities.

Of course, role play is not new to our subject, even if the adoption of technological support is. At Teesside we have a large scene house on campus, and our students role play crime scenes all the time, albeit in person rather than through avatars. Further, since the methods and techniques taught in many skeletal anatomy classes often need to be applied in the field, there is also the possibility of using simulated forensic archaeology/anthropology scenes.

In a learning environment, simulation “exists as a spectrum of educational activities” (Bradley, 2006; 261) and for students of many subjects (including medicine, the forensic sciences, and archaeology) this can simply equate to working in a laboratory setting. But with planning and effort on the part of the teaching staff, these can be more nuanced and challenging role-play based simulations – and the benefits of this approach for the students’ learning experience has been discussed extensively (e.g.: Bradley, 2006; Berryman and Lahren, 1984; Magalhaes et al., 2014). If we take another context, that of medical education, it has been shown that adding more realistic components to a teaching scenario (even simply wearing scrubs) improves long-term information recall when in that same context (Finn et al., 2010).

Thus to improve practitioner performance in the field, the field needs to be reproduced in the learning environment. The quicker we can get robots to support these activities, the better – well, until they inevitably become self-aware and start a bloody revolution. But until that point, there’s great L&T potential…

Magalhaes, T., Dinis-Oliveira, R.J. And Santos, A. 2014. Teaching forensic medicine in the University of Porto. Journal of Forensic and Legal Medicine 25: 45-48.