Criticism forms one of the pillars of academia. It’s constant and everywhere, and goes hand-in-hand with rejection – papers booted out, grant applications chucked in funders’ bins, mocking of your promotion application…

In theory this criticism should be part of a process of improvement and enhancement. The idea is that peer-review in whatever form it takes, acts simultaneously as a gatekeeper to quality in the discipline, and also as a vehicle for improvement. Of course that only works if the criticism is constructive. It’s like the conversations we have with our students here about providing not just feedback, but useful feedback. I use the idea of the criticism sandwich – positive comment, negative comment, positive comment. This is because when critiquing work it is just as important to note the good bits, so that we know what worked well and what can be built on. There has been a lot of discussion in the media about the ‘snowflake generation’ who cannot handle being told their work is rubbish, but usually this is about how the feedback is framed. I know plenty of ‘baby boomers’ (at the opposite end of the generational spectrum) who respond insanely when being told their work is rubbish. Again, it’s about how this is framed.

As an academic, the publication process is where you experience all of this the most. One of the things I noticed as Editor-in-Chief of Science & Justice was the cultural differences when it came to peer review comments. The tone, aggression, support, etc all differed from country to country. Seemingly the approach to criticism is very much embedded in national sensibilities and views on academia. A good EiC though will mitigate the worst excesses of this process so that the comments sent to the authors are honest, but constructive. We’ve all experienced rejection from Journals but there’s nothing more frustrating than not being able to develop your work as a result. The first paper I ever wrote was rejected without peer review! I understand now why that happens, but at the start of my career it was frustrating not to fully understand what was wrong with the paper and what needed improving (everything, it transpired…).

Everyone is entitled to their opinion. But it’s a mistake to think that all opinions should be viewed equally. And this is the rub. There are times when my opinion carries more weight than yours – when it comes to the effect of burning on the skeleton for example, or how to devise an innovative learning session, or the cultural resonance of The Amazing World of Gumball in our modern interconnected society. Other times your opinion will carry more merit. In fact, this is the basis for giving expert evidence in court, or the process of academic peer review. Some people’s opinions, based on experience and expertise, carry more weight.

Where this falls down is on this little thing called the internet. Here we have a combination of the ease of giving an opinion and the challenge of determining the merit of that opinion. As such, and as have been noted before, it often seems that those who shout the loudest are most engaged with. Further, there is often an expectation that one’s opinion should be acted on as if it were a universal fact. All of this is compounded by the fact that oftentimes these opinions are given online via anonymous profiles – thus allowing the user the confidence to post things with seeming impunity.

Which brings me to yesterday, when I was on Amazon looking up my book, Human Identity & Identification. This makes it sound like I spend my time Googling myself, but I was honestly just looking up the ISBN. Anyway, I hadn’t realised that some people had written reviews on the site. There are two reviews currently posted on the website.

So, let’s have a look at the first review. 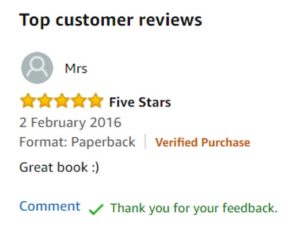 Fab! Five stars, positive message, and nicely ending with a smiley face. This suggests to me that the book has broken into the youth market! Terrific.

So, what about the second review…

I bought this for my work,

Brilliant. Am pleased to hear it.

thinking it was a book about forensics (see cover art and publisher). It’s not.

You are right, it is not. In fact, nowhere does it say that it is. The title doesn’t mention the word ‘forensic’, and the cover is literally just a picture of an arm cast in resin (by award-winning visual artist Eric Fong). It’s also published by Cambridge University Press, who don’t publish forensic texts. Why have you bought it thinking it’s a forensic book?

It’s basically one big essay about the sociological, socio-economical and gender-related implications we are subjected to

There you go. That’s what we say the book is about. You know, on the website. And on the back cover. And in the Intro. And every chapter in the book. And in the Conclusion.

based on ‘anatomy in modern (American!) society.

There are a few forensic and anthropological pieces of information hidden in this book, but you have to pick them out with a pair of tweezers.

It’s not a forensics book, dumbo. But literally every chapter is anthropological. There’s even an entire chapter on the skeleton alone, if that’s what you’re really interested in. But, I really do like the tweezers bit. I might use that myself! As in, this review has some factual accuracies in it, but you have to pick them out with a pair of tweezers.

The information in this book is largely irrelevant to archaeologists and modern forensic both. As an archaeologist, you don’t CARE that sex ” is only a social construct” – you can’t see if your skeletton once thought of themselves as genderqueer, but you can determine their sex (to some degree). And that’s what you should do.

Yeah, you’ve totally missed the point here. Indeed it is hard to determine how an individual defined themselves from their bodily remains. But sex is a classification system. People define that classification system. Therefore sex is a social construct that impacts on your ability to define sex, that is, place a skeleton into a classification grouping that people have previously defined. Also, if you’ve studied osteology in any form, you’ll know that we use a 5-point scale for classifying sex.

They might have been wolf-kin for all you know,

That would be fucking awesome!

but it’s irrelevant to your work.

Yeah, it really is relevant, dude.

As a modern forensic, you don’t CARE if race is “only a sociological construct”.

Of course it is,

but you want to know what your dead body looked like in life, so you can identify them. Their place in a social construct simply doesn’t matter here, their morphological appearance does.

Oh sweetie. Their morphological appearance is influenced by how their social world defined their sex, and responded to that. Also, see above about how these social constructs influence your ability to classify sex.

You don’t CARE if “adverse conditions can prevent an individual from attaining his or her genetic potential” (meaning height).

Probably depends on how tall you are…

You want to know that dead person’s height, full stop. You shouldn’t speculate about the possible implications of adversity which they may or may not have faced in life.

I guess it depends on whether or not you want to use the body to comment on how the deceased lived their life. That might be useful for identification, don’t you think..?

By the way: the book uses “sex” and “gender” interchangeably most of the time,

but at other times denies the existence of biological sex in the first place.

Chromosomes and the existence of various genitalia are a social construct?

Various genitalia! This I would like to see! This makes me think that I’ve lived a very sheltered life.

This book is a shame for Cambridge University Press.

They probably have more to worry about to be honest.

Its lack of objectiveness is ridiculous.

We don’t pretend to be objective. You’re confused because you think this is a hard-core science book full of forensic facts. As it happens, we actually critique the very notion of objectivity in the sciences. It’s in the Introduction, if you missed it.

And finally: the language is unnecessarily complicated for a science book.

Sorry we didn’t write this book in comic form. To be fair, you are the second person to complain that the text was too heavy-going. The other was my son. He was 7. Also, it’s not a science book.

I deeply regret buying this.

I wanted science, damn it,

Then buy a science book.

This is not the criticism that you think it is…

after half a bottle of Domestos.

Dude – your country has just survived a Tide pod eating epidemic, I don’t think you’re in a place to criticise. Anyway, no Domestos drinking here, although I did eat several very large bags of fizzy Haribo while writing the book. Does that count?

This is officially my favourite review of anything I’ve ever written. It’s just a shame that it wasn’t more constructive. There is no criticism sandwich here. Does such a negative review upset me? Not really. It would have done in the past, and it is a bit annoying because it is very unfair and as with much of the ranty criticism online, there is no way to properly address the complaints. Of all of that review, the only thing that may genuinely be true is the bit about pretentious language – the rest is just someone being angry that they bought the wrong book and that somehow this is the authors’ fault. Still, if it’s any consolation to the reviewer, the royalties from the book paid for dinner in a two-Michelin starred restaurant last Christmas… I wonder if they’d like an online review too..?