I don’t know if you’ve had a chance to see the recent Kenneth Branagh version of Murder on the Orient Express, but it’s very watchable. It’s got a great cast, it looks suitably opulent and has some nice lines in it. I’ve seen it twice now – once on my flight to Seattle for the AAFS in Feb, and then again this month at home. The nice thing about doing this is that you get to appreciate the film first as if in the dark, and then with the knowledge of what did what to who. I have to confess that I’ve not seen a previous version of this film, so had no idea who the culprit was. But as the great Belgian detective himself says in the film:

It struck me the second time I watched it, just how useful this film could be in some of our forensic science teaching. Although there is only the one death here, Poirot must tap into a number of different forensic disciplines in order to figure out what is going on. I thought I’d touch upon some of these, but obviously there will be spoilers ahoy…

Interestingly, even before Poirot enters the crime scene there is a nod to forensic awareness as he covers his hand with a handkerchief to avoid leaving fingermarks on the door handle to the crime scene. Inside the cabin there are a number of items that have been left conveniently around the room for the detective to find. There is a blood-stained embossed handkerchief which required some linguistic translation work; a pipe-cleaner was matched to another (no need for a stereo-microscope here); a burned note needed reconstructing, although the science that he applies to do so (seemingly just continuing to heat the paper in order to reveal the writing) is unclear (frankly it made me wonder if the note had been written in lemon juice like kids do).

But back to the body. The victim was brutally and thoroughly stabbed to death. 12 times to be precise. But the puzzler for Poirot is that the stab wounds all differed in depth, position, angle and ferocity. While he was thinking about how such variation could result from a single attacker, I was thinking about some of the discussions we have had in class this year on the study of trauma.

Now I have to be honest and say that I’m not a big fan of trauma. Either physically or academically (although as Associate Dean I have in my time caused it emotionally…). Nonetheless, I’ve ended up supervising a number of trauma-related final year and Masters projects over the years because it’s something that lots of students find interesting and exciting. But the truth is that it’s very hard to do a really good and meaningful trauma project, as the results tend to become very descriptive and suffer from small sample sizes.

Saying this, my first trauma publication derived from a great student project. We undertook an experiment to see if serrated and non-serrated blades could be differentiated from stab marks in ribs (they can) and whether the metal fragments that remain can be matched to the blades (they can’t). This work was followed up by a similar paper from anthros at UCL, who found different results – although I think this is due to methodological differences. One of my other favourite skeletal trauma projects produced the following results. What do you think may have caused this damage? 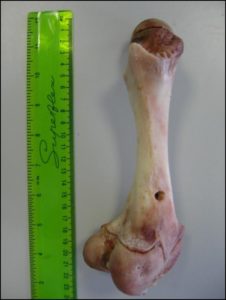 It’s not a drill as the edging of the hole is too smooth. It’s not a screwdriver because of the clean edges and depth of penetration. It’s not a bullet as the fracturing isn’t extensive enough. It’s actually (cue dramatic music…) an arrow wound. One of my students was a championship archer who was interested in skeletal trauma – so obviously we rigged up an experiment involving both!

Rather pleasingly, and despite my lack of sustained effort on this topic, our work has been used in the field, from Italy to Slovenia, in both archaeology and forensic investigations.

Studying traumatic injuries in bone for its own sake has never really floated my boat. This is why I don’t spend too much time on it in my lectures. But what I do find interesting is how this information can be used to understand the wider context of violence, particularly at the population level. As Komar and Lathrop (2012) have noted, such information is a valuable source of evidence, provides the means to understand and interpret large-scale violence in extra-legal contexts, reveals demographic trends and allows for the review of witness testimony.

This year in my Forensic Medicine teaching sessions we discussed, for example, the work of Jose Pablo Baraybar (Variation of gunshot injury patterns in mortality associated with human rights abuses and armed conflict: an exploratory study, Science & Justice 2015) who analysed sites of skeletal injuries in different conflicts to see if diagnostic criteria could be developed. He found that the nature of the context of violence influenced the location of injury on the body. We also looked at Dussault et al’s recent paper (Blast injury prevalence in skeletal remains: Are there differences between Bosnian war samples and documented combat-related deaths? Science & Justice, 2017) suggesting how such population-level data can be used to support or refute arguments at the International Criminal Court. This sort of approach shifts the forensic analyses into something more tangible and noteworthy; the significance of forensic trauma research now becomes clear.

Recently our team have been exploring new ways of recording and analysing traumatic injuries using 3D scanning. Our paper in the Journal of Forensic and Legal Medicine sets the groundwork for our current studies which have been focusing on recording trauma in living patients. This is much more challenging than scanning the deceased, partly because living people have a tendency to breathe and generally move. Extra thought and consideration is required in order to reduce the amount of noise recorded without exacerbating the injury of interest. Our previous work, especially that of Dave Errickson, supports this latest publication by underlining the potential significance of utilising that extra dimension in the interpretation of trauma on the body.

Back to Poirot. Now, I’m not saying that our approach to the study of traumatic injuries would have helped Poirot and sped up the resolution of his case, but you know, it totally would have…