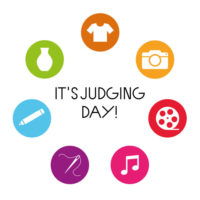 Saturday 28th May sees the long-awaited finals of the MIMA Great Create competition and six worthy finalists will be joining us at MIMA with their family and friends for an intimate celebration and the revealing of the winner by Elinor Morgan, Artistic Director, MIMA.

The competition opened to entries on 26th March 2022 and in just over six weeks the School of Arts & Creative Industries at Teesside University received a range of highly creative entries, from music clips, illustrations, paintings, upholstery designs and photographs, to short films, origami sculptures, drawings and more. Judging began on the 10th May and our team of judges from across the creative industries have made their decisions.

Six entries were shortlised, with judges commenting on the high standard of entries

“What a treat to get to review such creative work. There were some absolutely fabulous entries!”

The six shortlisted finalists along with friends and family are joining us for an intimate finals celebration at MIMA on Saturday 28th May, where the winner will be revealed and all finalist entries will be displayed in a pop-up exhibition in the MIMA atrium. The exhibition will be available to view over the coming Platinum Jubilee extended Bank Holiday weekend for all visitors to explore. Whilst you can see a version of the shortlisted entries below (links to songs on artist’s name), we’d encourage you to come along to MIMA to experience them visually and audibly in their full glory, in the creative environment of the atrium: 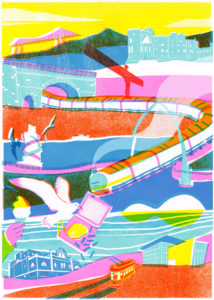 I created this piece with a risograph printer to build up the rich layers of history and beauty and celebrate details that are important to me as an illustrator; we have so many local creative hubs, like MIMA and Darlington Hippodrome, that are so resourceful and full of inspiration. I also wanted to celebrate my pride in being northern with a bit of humour because who hasn’t had a giant seagull steal a chip in their life, and I certainly couldn’t live without a lemon top! From steam trains to bridges, the North East is built with strength and radiance. 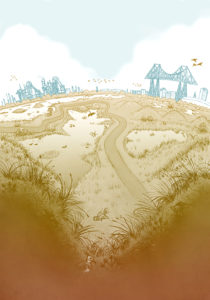 My entry, ‘Boro Skyline’ is an illustration inspired by the environment and landscape of Teesside and the different aspects of the area that represent it as a whole. The foreground nature scenery in the illustration is based on the RSPB saltholme and Seal Sands nature reserves and the heritage of the biodiversity preserved so close to the industrial areas that represent another, very different, part of the region’s identity. The illustration was drawn in fineliner, coloured in Adobe Photoshop and based on how varied, seemingly opposite, prominent elements of what makes up Middlesbrough and the region co-exist together as one. 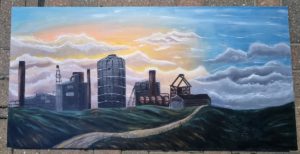 I  created an acrylic painting on canvas depicting a concept I  believe  is a dominant  part of my culture and region. ‘The decline of the Teesside Steelworks Industry’ as a result of postmodern technology and globalisation. This concept is  something that affected all generations in this region.
I chose a  long canvas and presented my painting  horizontally,  as you glance down  left to right, you see that the further along the canvas  the steelworks become less shows the industry has completely disappeared. 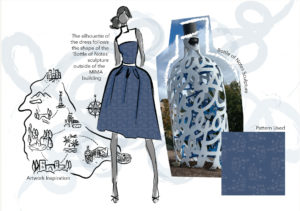 Since the theme of the competition is the heritage of North East England, I decided to recall all the memories I’ve made while studying here. Although I have yet to explore the whole of North East England, there are fond memories I have of this region. I’ve decided to commemorate my wonderful experience so I get to cherish it forever with this entry filled with my images.

I decided to write a piece of music to represent the history and current story of the Teesside region. Middlesbrough was one of the first towns to be bombed during WW2 so the first half of my track is full of trumpets and loud drums as an omage to the music played whilst armies marched towards battle. Using samples of the UKs greatest sports commentator, Middlesbrough born Chris Kamara, I attempted to capture how Teesside has evolved into a great and modern place as the track also evolves into a more modern sounding song.

The winning finalist will be revealed on Saturday 28th May – Good luck everyone!

Find out more about our courses: