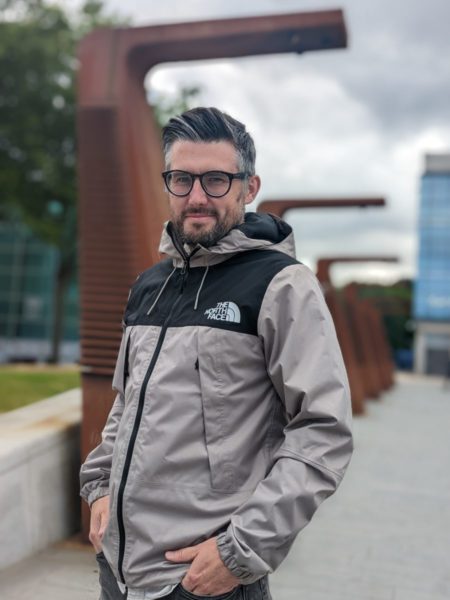 Jim Entwistle, former journalist and head of comms and now a Senior Lecturer in Digital Journalism at Teesside University, reflects on the important role of journalism in society

To the side of my new home is a mouldering garage containing all kinds of odds and ends left by the previous owners – rusted tools, yellowed sheets of newspaper, jam jars filled with obsolete metal fittings. We’re renovating the place and it feels at times as if these remnants are breeding. We’re four skips in and counting.

I was in the garage last weekend, desperately looking for something with which to write a note to the plumber. Among the cluttered shelves sat a yellow pencil with black writing on the side. I plucked it from the dust, wrote the message on the back of an old till receipt, and then went on to the next job.

Later, at lunchtime, I pulled the pencil from my pocket and looked more closely at its inscription – WILL HIRSTWOOD – EASTBOURNE JOINERY WORKS AND GARAGE – DARLINGTON 2498 – knife-sharpened at one end and teeth marks at the other. Idly wondering about Will, and if he might like his pencil back, I ran his name through Google, and found a good match in an article by Chris Lloyd of the Northern Echo: The ‘despicable, revolting and repugnant’ coffin lid scandal of Darlington

The story details how a William Hirstwood, a joiner from Eastbourne in Darlington, caused national outrage when he was discovered to be running a macabre scam. Will and his accomplice worked at the town’s crematorium in the 1940s. During a service they would wait until the coffin had passed behind the curtain, out of sight of the mourners, before removing the lid. They would then load the rest of the coffin – and its contents – into the oven before leaving in the hearse, ‘loot’ in the back.

When detectives visited Will’s depot, they found some 30 coffin lids stacked up, presumably ready for reuse and resale. Will was sent to jail for 18 months for his part, although there was some debate in court about the severity of the crime, if indeed it was one.

Chris’ feature, and of course the original court report it was drawn from, perfectly illustrate how much journalism contribute to our society. It is about open justice and holding power to account. But there’s more to it than that. It’s also about the scandal and the salacious and the threads that connect us with each other and that connect the past with the present.

Journalists play a key role in documenting our social history. As people and events come and go, and everyday life rushes by in a blaze of micro-drama, we rarely get chance to stand still and truly absorb the moments that make life interesting. But in the middle of all this flux, journalists through their daily work give permanence to the otherwise transient.

In March, I joined the team working with the next generation of reporters on Teesside University’s Journalism course. Clearly, times have changed since the 1940s, when the Northern Echo reported on Will’s appearance at Darlington Magistrates’ Court. On top of the fundamentals, our students produce news websites, make video and write for social media. The channels may have changed somewhat, but in essence, the job is much the same. It’s about rooting out those stories and presenting them to the public as a matter of record, however despicable, revolting or repugnant they may be.

I’m very much looking forward to working with the next intake of Journalism students in September and would welcome queries from anyone thinking about a career in the trade, which is every bit as important now as it was in the days of the Coffin Lid Scandal of Darlington.

Read all about our  Journalism students

Journalism graduates went from course to career at Teesside University 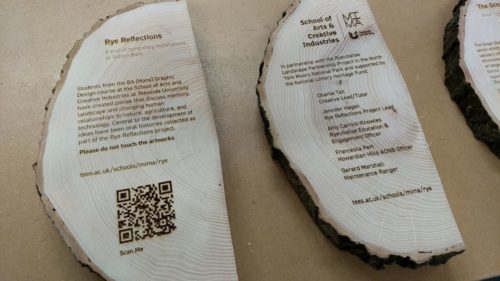 Students from the School of Arts & Creative Industries at Teesside University have teamed up with the Ryevitalise Landscape Partnership Project to create a series of installations for The Rye Reflections Art Trail, which can be visited throughout the Summer at Sutton Bank

The Rye Reflections Art Trail is a joint project brought together by the Ryevitalise Landscape Partnership Project in the North York Moors National Park and students from the BA (Hons) Graphic Design and Illustration course at Teesside University, supported by the National Lottery Heritage Fund, the UK’s largest funder of heritage.

Graphic Design students created 5 installations which can be seen along the Art Trail – visitors are able to collect a map from Sutton Bank Visitor Centre which shows exactly where each installation is sited. The pieces have been inspired by memory landscape and changing human relationships to nature, agriculture, and technology.

Central to the development of ideas have been oral histories collected as part of the Rye Reflections project. Details of each installation and the accompanying oral history extract can be seen on the Teesside University web page

Students were supported by Senior Lecturer in Graphic Design, Charlie Tait, an inter-disciplinary designer who often works with cultural and heritage based subject matter. Charlie said:

This project has required a deep engagement to develop creative responses that function in this specific environment. I think the students would agree the project has taken them into new areas of practice and given valuable insight into the practical constraints of realising their work.

We have worked together to analyse research, question concepts and test materials – it has been magical to see this work installed and reflect on the journey each student has been on as they respond to feedback to take their ideas forward.

The project has included an initial field trip with artist, Paula Hickey, and photographer, John Arnison, as well as presentations to project officers, Amy Carrick and Francesca Pert. These experiences have helped students gain insight into the collaborative nature of creative work. I would like to specifically thank our expert workshop technicians; their positivity and knowledge of materials has been invaluable.

The installations will remain on the Rye Reflections Art Trail until October 2022 and represent a unique opportunity to see how students in the School of Art & Creative Industries work on live project briefs as part of their degree course. For further information about courses in Art and Design please visit the following pages

Undergraduate courses in Art and Design

Postgraduate courses in Art and Design 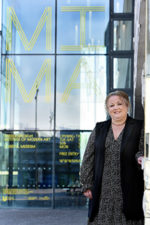 It’s hard not to hear about the cost of living crisis, with food, petrol and utilities prices soaring daily – UK gas prices have now hit a three month high. With the government urging businesses to slash prices, how will this affect brand pricing and brand loyalty as we tighten our belts to make purchase decisions? Associate Dean, Angela Lawrence talks of her own brand loyalty challenges.

I love a tin of Heinz tomato soup, the flavour reminds me of my youth – Dad opening a family-sized tin of soup, warming it on the stove and dishing it out to our eagerly awaiting hands, scooping bowls like real life Oliver Twists. I’ve tried various supermarket brands, cheaper versions of tomato soup, but quite honestly nothing tastes quite like Heinz (with a dash of Lea & Perrins Worcestershire sauce!). 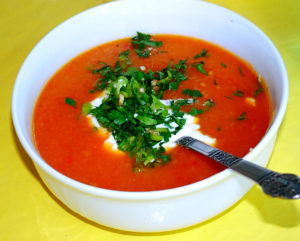 We’re told that Britons are paying almost £3 more for an average 20-item shopping basket than 12 months ago and as my weekly basket cost increases, I noticed whilst browsing the supermarket shelves of late that my beloved tin of soup has now increased in price to well over £1. As I write, it is on offer at £1.10 in Sainsburys compared to 59p for their own brand version. A search online shows that I’m not alone in loving that Heinz taste and that the Asda version at 50p is as good as it gets. So, naturally I’m going to give it a try – if it hits the mark then Asda could become my new best friend.

So, I am prepared to sacrifice my loyalty to the Heinz brand and The Grocer magazine reports that up and down the country frugal shoppers are making similar decisions – 34% of us are switching branded products for cheaper alternatives. Yet as a marketer, I am passionate about branding, I teach students about branding and I recognise the importance of branding for business success.  Branding enables businesses to grow loyalty, to command higher prices and to stand out and be recognised amongst competitors.

However, it’s not all about selling at a higher price – businesses invest heavily in branding campaigns and seek to connect with their target audience with strong branding. If we want our country to crawl out of the threatened recession then we surely want businesses to be successful – it’s not just the powerhouses such as Heinz, but the SMEs up and down the country who all invest in, and rely on branding for business success.

The struggle is real and the branding dilemma seems to be affecting stocks of branded products already, my favourite soup included. I wonder whether this is the end for branding – will newly formed shopping habits remain once this cost of living crisis is over, or will we simply revert to making purchase decisions based on brand loyalty? Will belief in the power of branding be damaged and will brands ultimately have less power? Perhaps brand owners will have to consider new tactics to appeal and maybe trimming a penny or two here and there will make the difference.

Lots to ponder over and I’m not sure that I have the answer, but I’m looking forward to healthy discussions about branding when students return to Teesside University in September. Meanwhile, I might just nip to Asda now, to purchase that tin of soup… which may help me to make up my mind!

The School of Arts & Creative Industries offers a wide range of courses that include modules on branding – here is a selection to browse through: