One day, I will learn not to post a glib tweet about a TV show right before bed. But that day will not be anytime soon as we all know that I like the attention…

When it comes to forensic science on TV shows, I’m usually pretty zen*. Like a leaf in the wind. I know that some artistic licence is needed because this is entertainment, and much forensic analysis is visually rather boring. And slow. I’ve even advised TV shows myself so that they can skirt that fine line between factual science and pacy drama. I’m also aware of the significant debate that the forensic science on TV shows has caused, specifically around the so-called CSI Effect. But this is contentious, with Simon Cole noting in the journal Public Understanding of Science that the very term is ill-defined and inconsistently used and David Errickson and colleagues arguing in the Journal of Forensic & Legal Medicine that “if the CSI effect does exist, the effect is confined only to public perception, bearing no influence to working forensic practitioners“.

(*this is blatantly not true)

The only time I’m really triggered** is when it comes to burned bodies and bone. Because that’s my bag, and if I don’t point out the issues then, well what has been the point of spending 20 years studying it. Exactly. No-one wants to contemplate the pointlessness of their life’s work.

(**this is blatantly not true)

Which brings me on to last week. Like most people, we’ve been spending vast amounts of time on Netflix and Amazon Prime whiling away the lockdown. Inevitably we stumbled upon Lucifer, a show based on the work of the excellent Neil Gaiman which sees the devil come to earth and help out a detective in her investigations. It’s a weird premise for what is essentially a procedural cop show, but a show about the lord of eternal punishment and damnation seemed appropriate for someone working in HE. Anyway, it’s kind of mindless fun which is what one needs at this time.

The episode in question (s2 ep3 Sin-Eater) featured a guy tied to a stake and burned alive as punishment for posting an embarrassing video of someone online. The forensic person (because in these shows there’s only one and they do all of the forensic disciplines…) then examined the body and noted that the burn pattern indicated that the fire started in the crotch region. But it did not. It did not. And when I said this out loud on Twitter, I rightly got asked for more detail. So this post is your fault, really***.

(***this is blatantly not true)

For those of you who don’t know, and the only reason for this would be that you haven’t read my work and so shame on you, the body undergoes a number of heat-induced changes when exposed to fire. The soft tissues (skin and organs) dehydrate, contract and then split. Once the skin is ruptured the internal organs are exposed and then the skeleton and so the changes speed up. The blood will breakdown and change colour. The skeleton also changes, first in terms of colour and then through fracturing and changes to the crystal structure. The situation is further complicated by the interactions of all of these variables. For example, work led by Dr Sarah Ellingham and published in the Journal of Forensic Sciences showed that in low temperature events the soft tissues act as a buffer to slow down heat-induced change, but in higher temp events it acts as a fuel and speeds up such changes.

There is much to unpick from this short scene so I’ve popped a few screen grabs of the episode right here for you:

So what are our initial thoughts? Well, the things that whizzed through my mind were:

I don’t know about you, but I feel better for getting all of this off my chest. And here we have another example of something I’ve spoken about before, which is using TV shows and movies in our teaching to help illustrate points and kick-start discussions. Anyway, if you take nothing else away from this, remember this forensic science 101 lesson: 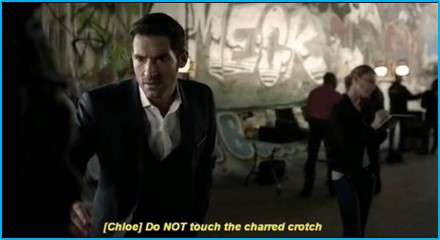