Earlier this year I wrote a bit about the forensic aspects of Kenneth Branagh’s version of Murder on the Orient Express, a film which I really enjoyed. Since the BBC’s recent version of The ABC Murders with Poirot over Xmas seemed to be so divisive, I thought I’d wade in again. So here’s my hot take, as they say…

For me, this wasn’t really a three-part murder mystery, but rather an interesting exploration of how one can change. The grisly murders (and they were spectacularly grisly) were a framework to allow discussion of differing aspects of identity, something that I’m deeply interested in and have explored in my research. For example, it looked at how Poirot had become Poirot, and then what happened when that public version was no longer what the world wanted. How does an increasing irrelevance affect one’s sense of self? For a key suspect, the question was whether your actions make you a monster and what do you have do to remove that from one’s sense of self. And for the murderer, how does an increasing addiction to killing change how you, or others, view yourself. And of course, as has been noted, the setting for this exploration of identity comes at a time of change (1933), at a point when the nation itself debated who it was. Sound familiar..?

It actually made me think of Hitchcock’s North by Northwest, which is an excellent mistaken-identity romp, in which through a series of escapades our dashing hero slowly becomes the person he is mistaken for in the first place.

Reading through the online comments about this recent adaption (have a look here or here), many of the complaints seem to be that it is not a ‘proper’ Poirot, or that it is too politicised. It’s perhaps appropriate that much of this criticism of a programme exploring what it means to be Hercule Poirot, seemed to focus on this Poirot not being the ‘proper’ Poirot. I’d argue that there is no proper Poirot. I’m sure the David Suchet version, which people are so fond of, is not how Christie imagined him. And people were not so critical of the new Branagh interpretation. I suspect that part of the issue is that this is not some genteel vision of crime-solving, but rather a heavily stylised and dark one. But Sarah Phelps‘ previous Agatha Christie adaptations were equally stylised and not so divisive, and let’s not forget that the criminal is a serial killer who virtually decapitates two people, so I’m not sure how genteel that should really be.

So perhaps of greater issue is that much of the plot includes the incorporation of a refugee and ‘useful foreigner’ narrative. This is Poirot through the lens of BREXIT and it was an unsubtle message subtlety delivered. I wonder too whether this version highlighted the fact that the nostalgic view of the past many keep harking back to as part of this BREXIT debate is actually steeped in desperation and struggle – not something that tends to get emphasised.

I should also note that Malkovich was excellent – imbuing Poirot with a world-weariness and a sense that his time has passed. Going back to my previous point about the criticism of this version, there’s even a whole article online describing why his moustache matters so much and why it was a mistake not to have it front and centre here. It represents “crucial aspects of his character: vanity and absolute self-confidence”. And it does, but both of these aspects are severely punctured here and again taps into that sense of him being past his prime. Also, it’s good to see Ron Weasley all grown up with Rupert Grint taking another role that shows there is much more to him than Harry Potter’s sidekick.

The main forensic contribution didn’t come until the very end, when fingerprints were used to link a suspect to a typewriter used to write taunting letters to Poirot. Perhaps surprisingly the same methods weren’t applied to the numerous letters themselves, or indeed the many implements of murder dotted around the British landscape.

This was a bold interpretation of Poirot, which for me worked well. Yes the story was silly, but then many Agatha Christie stories are silly. Much of the criticism seemed to be of the ‘Waah waah! This is different! Why isn’t this the same as before’ variety (see also: The Last Jedi…) – well, because it isn’t, and like Poirot’s sense of self and public identity, things change and evolve. And with that, I’ll pass over to the writer herself: 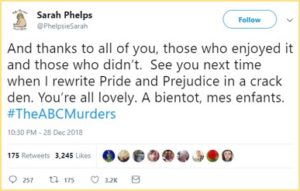