Last week I was invited to give one of the keynotes at the DigiDeath: Public archaeologies of digital mortality conference hosted by the students of the Archaeology department of the University of Chester. And as an aside for learning & teaching folks, the student-run conference forms part of their module assessment. Anyway, I was delighted to have been asked to contribute alongside a host of leading experts. I’d recently written a chapter with Dr Dave Errickson on the depiction of the dead in social media (in Ethical Approaches to Human Remains), and that provided the main framework for my talk. But I needed a new title, and went with the timely ‘Should we be socially distancing from the dead?’. I was very pleased with myself for that, and frankly it was all downhill from there… 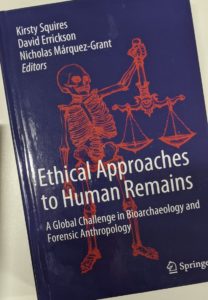 I was going to just put my notes up on here, but then I remembered that I didn’t have any. This is because I like the thrill and spontaneity of just talking about a subject. It makes it all terribly exciting. Except for the organisers. They hate it. But that’s because there’s no trust… Literally all I have written down is “Medical 3D printing”, “Forest case work” and “photorealism – photogrammetry vs SLS”. Frankly, that is of no help to anyone. Including me, and I was speaking. So maybe the organisers have a point…

So instead I’ll just give you a summary of the key points. And you can watch along with the actual presentation too! Check out the slides here in this handy Microsoft Sway…

I felt the key starting point was a bit of context. We all look at these questions and issues through a specific and personal lens, and I am no different. So I laid out my long-standing interest in the ethics surrounding studying the physical remains of the dead, and how as a visually-minded academic, I was particularly interested in images, imaging and visual presentation. Then I discussed how my work in the forensic arena had influenced this further. I drew particular attention to the paper by Weber (2014) who discussed the six ways in which virtual anthropology would impact on practice. Then I overlaid the principle of the ‘Rule of the Hammer’ which I love as it neatly describes how new methods are often applied willy-nilly to archaeology without really asking why or for what purpose. We can point to myriad examples where surface scanning has been performed in such a manner, and in the forensic world this has implications because of the potential slow development of standards and SOPs (basically people rush forward to do all the exciting stuff and forget to take the time to do the fundamentals which underpin the exciting stuff). Although I’m talking about digitisation here, I often use ancient DNA as an example since it is often applied without due consideration of the wider context and I inexplicably like goading ancient DNAers… I ended this section by talking a bit about the impact of visual representation of the dead in the forensic context, specifically in terms of the significance of the input of the scientist in the post-processing stage and the way that the manner of presentation can influence jurors, and therefore, the public.

I then laid out some thoughts about how the dead are ‘used’ in images. I took Harries et al’s (2018) paper in the journal Human Remains & Violence as a framework, since it suggests that images of the dead have both a therapeutic and non-therapeutic role. Education falls into the latter camp, although I’m never fond of entirely dichotomous models since oftentimes it can over-simplify matters. Can an image be both non-therapeutic and therapeutic? In terms of images used within education, I’d say yes. For example, in my own teaching I use photographs of my Granddad when he was young and deployed overseas in WWII and they both make a point about mass movement of people and allow me to commemorate my key childhood father figure. I then spoke a bit about how images of human remains are another way of making the dead work, and questioned whether this was acceptable (certainly in some contexts this already occurs) and how it relates to the concept of self-determination after death.

I then tried to get the delegates to think about where they’d put the line of acceptability in terms of putting images of the dead on social media. Is it okay to take a photography of the gates of Auschwitz-Birkenau and post it online? Is it okay to do so with a descendant in the photo? What about an image of the gates with yourself in it? This is a perennial debate that appears in the press as some young visitor is accused of gross disrespect. But surely part of the appeal of social media is the way in which one can instantly share experiences with others who have experienced the same. It’s a way of building and maintaining a community. So where exactly is that line? Is the display of the dead in a museum that anyone can visit, any different from the display on social media? And what of the Huntarian Museum which does not allow photographs within its anatomy museum, but has a detailed online collection for view? Or the Body Worlds exhibition which forbade photography when on tour in the UK but not in the permanent exhibition in Amsterdam? Perhaps it is something about social media, rather than photography or display itself, that is the issue. And lets not forget that images of the dead on social media can bring valuable attention to otherwise ignored humanitarian crises or contexts of violence.

I then fired off a series of questions for consideration. But, like, not to answer because they’re super-complicated…

I then used two images to muddy the waters further. One was from a Second Life (remember that..?) virtual excavation we ran for our students which involved the recovery of human skeletal remains represented by poorly rendered digital skeletons. The second photo was from my Dactyl app which showed a hyper-realistic temporal bone. But the bone was actually a composite of several temporal bones. So does it matter if the image is an actual person, or if it is a representation?

Time was running out so I had to draw my talk to a close. At the start I had mentally told myself to go slowly as I have a tendency to talk very fast. But I went too slow. Honestly. So I made a few conclusions to end on. First was that it was important to remember that social media and the digital display of the dead has an important role to play in increasing accessibility to scientific and cultural knowledge, that it can form a part of the Education 4.0 approach, and has been vital for education during the pandemic. Second, is the notion that much of the debate surrounding this issue concerns the appropriateness of who is posted the images online. There is a hierarchy involved here – some people have more ‘permission’ than others. Finally, I laid out some general considerations for posting images of the dead on social media:

And that was it. We had a great discussion afterwards, and I hope the delegates found it interesting and thought-provoking. Overall the conference was a really interesting exploration of the interplay between the digital world and archaeology – and well done to the student organisers and presenters.