So, I almost knocked over both Emily Thornberry and Floella Benjamin in one day…

Forensic science is in a challenging place at the moment. The well-publicised closure of the national Forensic Science Service and the rapid marketisation of forensic provision has left the sector a little winded. Combined with the complexity of contracting out forensic services, the increasing demands associated with ISO accreditation, the budgetary cuts, the fragmentation of research and so on, it is little wonder that the criminal justice system and the public at large are worried about the state of this vital service. And so are we. So it was with real interest that we watched the House of Lords Science and Technology Committee establish and launch its Inquiry into Forensic Science. And then things got serious when I was asked to provide oral evidence to the committee. 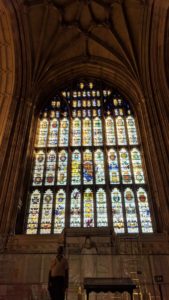 If you’ve never been into the Houses of Parliament, it is just as you’d imagine. A glorious historic building with gilded decor, opulent chandeliers and more busts of dead Prime Ministers than you’ve ever seen. It’s a seriously impressive building. And I have to say, as skeptical as I was before about the £3.5 billion refurbishment work to restore the building, after my visit I have completely changed my mind. It’s an important structure and sign of our history that warrants conserving and preserving. It was while I was admiring the stained glass windows and thinking just this that I almost clattered into MP Emily Thornberry. If you’re of a certain age, you’ll be delighted to know that Baroness Floella Benjamin is much more fleet-of-foot in these circumstances…

The Inquiry itself has been accepting written evidence for a while, but the commencement of oral evidence began this week. Thankfully we got sight of the questions beforehand, so it gave a little time to prepare some points to raise. The actual day though was quite intimidating. I don’t often get nervous anymore having given approximately a bajillion presentations and talks over the years, but I was with this. The combination of the surroundings, the seriousness of the proceedings and the fact it was being live streamed all added to the tension. No-one wants to mess up on a national stage. Unfortunately the questioning did not start off well. After the panel introduced ourselves (me, Dr Karl Harrison and Dr Sarah Morris) the Lord Chairman proceeded to state that he was glad that I had been to a more prestigious university earlier. Immediately I was cross – the opening gambit in this vital inquiry being a slight against my workplace. As it happened, I hadn’t quite heard him correctly and later through the discussions it became evident that Lord Patel was making a light-hearted joke because he was Professor at Dundee, where I had also worked. Oops. After that I could concentrate on the questions, which officially included:

In reality, the questions were more nuanced and I tried as best as I could to answer the robust quizzing as it skipped about from confidence in forensic evidence, to research, to the employability of graduates, to the contribution of the professional bodies. This was trickier than it sounds, because the answers reflected the state of play in forensic science – complex. Being mainly academics, our panel focused our answers from that particular perspective and I think we gave the Committee something useful to support their work. I felt I was more confident when responding to the current state of education and research in the sector, where I could discuss the QAA benchmark in forensic science, the acknowledgement of the multidisciplinary nature of our research in the REF assessment, and the challenges of getting funding for not-terribly-exciting-but-nevertheless-rather-important validation studies. Still you can judge for yourself by watching the presentation of evidence on the Parliamentlive TV website.

And then after an hour we were done. A quick interview with the BBC followed and then off out of the building. The end was a little anticlimactic frankly; thrust out of the heart of British democracy with nary a second glance. Nonetheless, it was a privilege to be able to contribute to such an important event in this way, and I’m very grateful for the opportunity. And I managed not to swear, so that’s a plus.