Understanding human behaviour requires an appreciation of social history, anthropology and archaeology (Tileagă & Byford, 2014), from which comes an awareness that people always sense, interpret and respond in a social, historical, economic and geographic context.  Geographical psychology (Rentfrow, 2014) showing that human behaviour, including geopolitics, can be understood by geographical factors (Chen et al., 2020; Diamond, 2005; Marshall[1], 2015; Schaller & Neuberg, 2012; Van de Vliert, 2016) is of particular relevance in understanding the emergence of individualist and collectivist cultures around the world.

With this interdisciplinary spirit, research has shown that the widely used description of cultures as individualistic or collectivist is a product of a range of forces acting on the people living in different environments.  Culture is not a product of people but a process of people interacting with differing contextual forces and, as such, is liable to change should those contextual forces change.  Culture is more of a process than a product.

Nisbett (2003) outlines probable mechanisms by which Europe and China came to be psychologically different by contrasting the life and environment of Ancient Greece with that of China.  Through this he offers part of an explanation for why Western Europe became individualistic and China, collectivist.

Life in China from the same period:

In summary, the geographical differences of Ancient Greece and China afforded very different developmental trajectories which gave the cultural differences of collectivism and individualism.  However, with people exploiting, influencing and changing their environments, social life could change as indeed happened in Europe which became less individualistic as agriculture took hold, and would remain so until the Roman Catholic Church’s European Marriage Pattern (Henrich, 2020) and the Renaissance afforded changes in the social fabric of Western Europe, the former by establish very strict rules on marriage and the later through a rebirth of interest in the arts, philosophy, astronomy, and mathematics.

The early Renaissance period was marked by the Black Death, a critical juncture discussed below, and later the emergence of European exploration (for example: Marco Polo, Christopher Columbus and Ferdinand Magellan) which changed both the countries of the European explorers and those of the people which they “discovered”.   In short, research shows that individualism is not a fixed characteristic of a population (Santos et al., 2017), but is subject to range of pressures including:

The changes in Western Europe in the latter third of Medieval period in Europe included:

As an interim conclusion (see figure 1), macro-situational pressures affect how people sense, interpret and respond which can be expanded to assert that the cultural dimension of collectivism-individualism is, at least in part, a product of the neolithic farming revolution interacting with the physical geography of the different locations around the world as and when it unfolded.  As a significant proportion of our behaviour differs around the world (for example, Nisbett, 2003) our psychology is, to an extent, the product of differences in the world’s geography.

The psychology of religion identifies that religions bind people together (Diamond, 2012) and that, in the context of the big Gods of Christianity, Judaism and Islam, people watched by Big Gods are nice people but the fear of hell is more potent force than the attraction of heaven (Norenzayan, 2013).  More extensive analysis, as summarised by Henrich (2020), suggests that geographical factors are augmented by specific religious events in Mediæval, Western Europe.

The argument that the Roman Catholic Church and then Protestant Reformation played a large part in creating Europe as it is, culturally, today is very strong.  The Church’s Marriage and Family Programme reshaped the European family, giving Western Europe the contemporary social structure which Britain exported to what is now the Anglo-Saxon world.  Both these religious drives and the geographical factors that moulded life in Ancient Greece, allowing the emergence of an individualistic style of life made Western Europe with its individualistic cultural structures.  It is for that reason that the preponderance of psychological research based on the WEIRD samples of Western Europe (and its derivatives in the Anglo-Saxon world) do not necessarily say anything about the majority of people in the world.  There are also strong pointers that, to understand human behaviour, social scientists need to look around people and not in people.  Arguably, too often, psychologists commit the fundamental attribution error but then, since most of their work is with WEIRD samples, one would expect that (Yama, 2018). 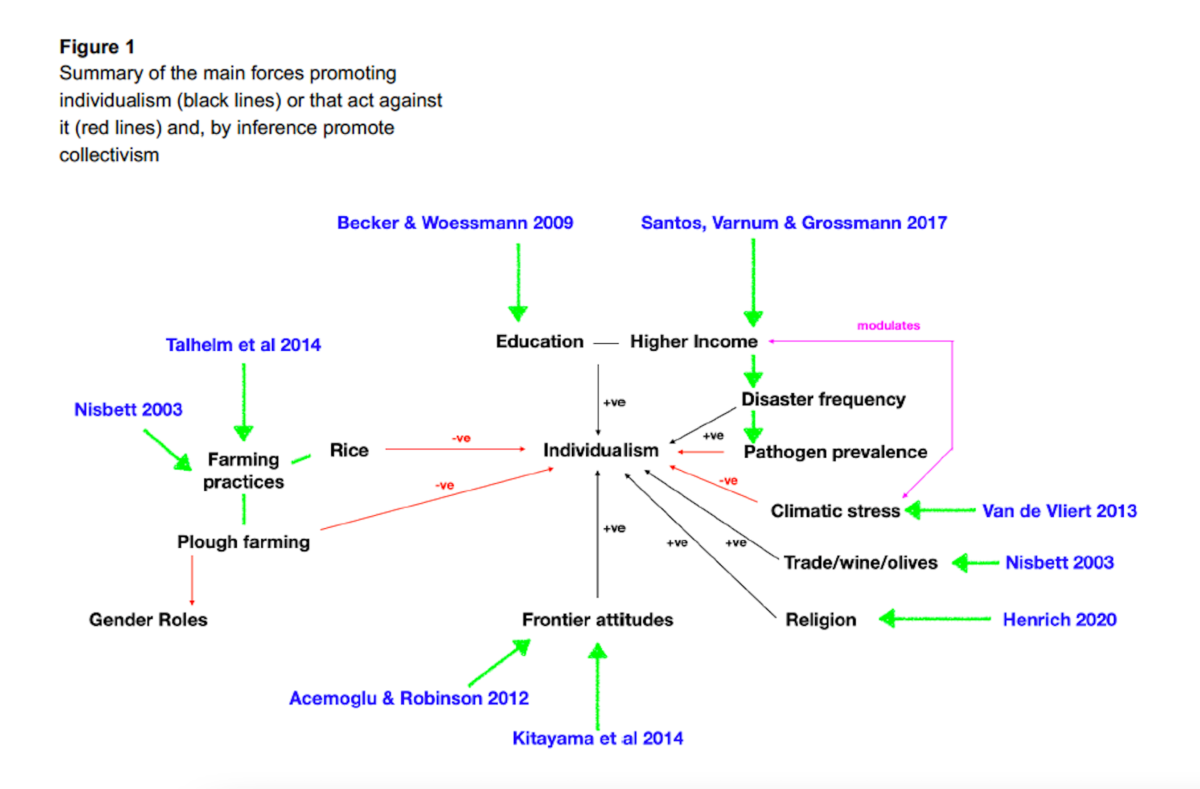 I have to thank my daughter, Molly, for sharing her passion for geography with me and to my wife, Alex, for being so patient as I read book after book and paper after paper through the lockdown periods, furthering a project I started in 2018.

Diamond, J. (2012). The world until yesterday: What can we learn from traditional societies? Viking.

Marshall, T. (2015). Prisoners of geography: ten maps that explain everything about the world. Scribner.

Nisbett, R. E. (2003). The geography of thought: How Asians and Westerners think differently .. and why. Free Press.

[1] Tim Marshall’s book, Prisoners of geography is a current, topical and readable introduction to geopolitics.