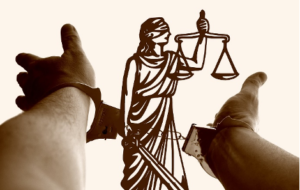 We may find using the words “suspects” and “ethics” in the same sentence weird. After all, if a person currently being interviewed by the police could be the one who committed a horrific crime we have just heard about on the news, why should he or she be treated ethically? There are several answers to that question. But before we answer that question, we must understand what it means to treat suspects of a crime unethically.

You may have heard of the Guildford Four. On October 5th, 1974, two bombs were detonated at two pubs in Guildford, Surrey. This led to the death of four British Army soldiers and one civilian as well as injuring 65 others. The British Police believed the Irish Republican Army was responsible for the attacks. So, when the Police learned of Gerry Conlon, who was originally from Ireland and in London at the time of the bombings, they arrested him, along with two other Irishmen and an Englishwoman. These are known as the Guilford Four. A few days later, seven more people, known as the Maguire Seven, were arrested. They were all convicted of the bombings and sentenced to between four years and life in prison.

However, in 1989 and 1991, the convictions of the Guilford Four and Maguire Seven (respectively) were quashed. Why? Well, it turned out that their confessions, on which their convictions were heavily based, were unreliable and, in some cases, fabricated; in fact, the individuals were even tortured to provide these confessions (Griffiths & Milne, 2006; Naughton, 2011). You can probably understand the unethical issues presented in this example, but just in case—let’s go through them. Firstly, some of the confessions were fabricated by the police, which likely happened due to the pressure the police were under to find the culprits. Secondly, and even more alarmingly, these individuals were physically and emotionally tortured to provide their confessions. Finally, and most disturbingly, they were convicted of a crime they did not commit and sent to prison when they were, in fact, innocent (I warmly suggest that you watch the great 1993 movie “In the Name of the Father” about this exact case).

Hopefully, by now, you have some understanding of why police interviewing techniques have been unethical in the past in England and Wales and the potential consequences which stem from the use of such unethical techniques. But you may be thinking: “OK, but what’s wrong with using such methods with people who actually committed the crimes for which they are being interviewed?”. Worry not – I can answer that, too. Other than the fact that torture is of course inhuman, degrading, and violates human rights, it is also simply ineffective in gathering valuable information from interviewees (see Vanderhallen & Vervaeke, 2014). By “valuable information” I mean any details that help the police to learn the truth. So, while we don’t want to wrongfully convict innocent people, I hope you agree that we want to gather all the accurate information we can to convict the guilty—and this requires treating all suspects ethically.

Thankfully, after several unfortunate cases in which miscarriages of justice occurred, just as those of the Guildford Four and the Maguire Seven, it became clear that a change had to be made with respect to how suspects were interviewed in England and Wales. This change came in the form of a national model for investigative interviewing known as the PEACE interview model (Central Planning and Training Unit, 1992a, 1992b).

The change from the confession-seeking interrogation to the ethical interview in order to gather information was a positive step in attempting to decrease miscarriages of justice. However, we—as researchers—can’t stop here. That is, we must continue to study ways in which the process of suspect interviewing by police officers can be improved even further. Such research may focus on the actual instructions provided to suspects before they provide information. Here researchers (e.g., Leins & Charman, 2016) usually ask: What instructions are best in encouraging suspects to provide the most accurate information they can? Additionally, research may focus on more “discreet”, less obvious aspects of the interview. For example, we may wish to examine the effects of the guilt or innocence belief with which interviewers start the interview process on interview outcomes (Portnoy et al., 2019).

I hope that now you understand why it is mandatory for the words “suspects” and “ethics” to appear together in the same sentence, and, importantly, why they must co-exist together in practice. While our emotions may cause us to wish that the police do everything in the world to solve a heart-breaking crime we’ve just heard about on the news, this article should clarify why some interviewing methods may be pointless and why other, more ethical methods, are preferred.

Naughton, M. (2011). How the presumption of innocence renders the innocent vulnerable to wrongful convictions. Irish Journal of Legal Studies, 2(1), 40–54.