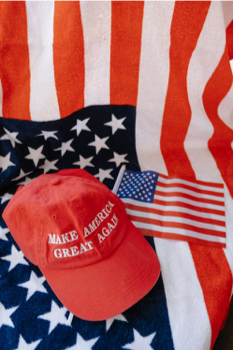 “A globalist is a person that wants the globe to do well, frankly, not caring about our country so much. And you know what? We can’t have that”Trump’s Election Rally, October 22, 2018

Trump is well known for his expression of controversial views, particularly on his Twitter page. However, after 12 years of using the platform to portray his contentious views, in January 2021 he was permanently banned under Twitter’s glorification of violence policy (Twitter Inc., 2021). The discourse of Trump is something that at one time we only heard from extremist, far-right figures. Now we are seeing someone who is a populist figure, whilst at the same time is frequently accused of being a racist. Trump is an example of how we have seen populism grow, and the far-right’s affinity with it.

Social media can be a valuable tool for politicians and help to increase their popularity (Klinger & Svensson, 2015). Trump has been able to generate plenty of free publicity through the platform of Twitter and reaped the rewards through the number of followers he has, and retweets his tweets receive.  The platform has also been suggested to have helped him win his presidency campaign (Guardian, 2015). Unlike the usual protocol for politicians, Trump authors his own tweets rather than a public relations team. This results in an ‘amateur’, de-professionalised approach, yet he is still seen as authentic as his social identity ‘online’ is closer to his social identity ‘offline’ (Enli, 2017).

Trump is well known for criticising the mainstream media for being ‘fake news’ and has blamed other communities such as Chinese people for the spread of COVID-19 (see my previous blog from 12th April 2021 for further reading on prejudice and COVID-19). In October 2016, a recording was published by the Washington Post detailing Trump boasting about assaulting women. Trump apologised and defended the incident as “locker room banter” (CBS News, 2016). Academics argue that such discourse normalizes violence against women (Wodak, 2021). The backlash to this was the trending hashtag on Twitter #NotOkay, where women shared their own experiences of sexual harassment and abuse in places such as public transport and at work. This shows how Twitter can be used as a platform to make a call for change and challenge problematic discourse. During his time as president of the United States, Trump’s tweets would often be removed due to not being verified by Twitter, or a ‘fact-checker’ would be added to the tweet, warning users that the tweet potentially contains misinformation. One example of this was when Trump attempted to factually claim that the results of the 2020 US presidential election results were a conspiracy whereby “the liberals” stole the election.

Social identity theory (e.g., Hogg, 2001) tells us that ‘prototypical’ leaders are the more popular type of leader, as they embody the groups’ attributes and identify strongly with the group. Trump advocates himself as a rich, extraordinary businessman, not someone that many people can identify with. Yet he had 89 million followers on Twitter, and he appeals to ‘the people’ through his anti-establishment stance. Trump relies on his leadership style to create polarised views, as he gains the attention from both the negative responses of those who disagree with him and positive responses from his supporters (Wodak, Culpeper & Semino, 2020). Discursive research shows that politicians usually disguise potentially prejudicial talk as reasonable, particularly when discussing issues such as justifying support for harsh treatments towards minority groups such as immigrants and asylum seekers. This is to appear as more moderate and thereby appeal to mainstream audiences (e.g., Augoustinos & Every, 2007; Goodman & Johnson, 2013). Right-wing populist figures such as Trump express the type of extreme and prejudiced discourse that we used to hear only from the far-right, which means that such talk has become normalized. Trump has already showed affiliation with the far-right by sharing Anti-Muslim content from Britain First on his social media. This share resulted in a campaign to attempt to ban Trump from visiting the UK under anti-extremism policies, which was debated in parliament.

On 8th January 2021, he was permanently banned from Twitter after urging his supporters to march on Capitol Hill, Washington D.C., on 6th January during the session of the US Congress to verify the electoral victory of his opponent Joe Biden. Twitter justified the ban by saying that his tweets increased the risk of inciting further violence. Trump tweeted that he would not be attending the presidential inauguration, emphasising to his followers his belief that the election result was not legitimate. This also signalled to his followers that storming the Capitol would be a ‘safe’ target.

Before his ban, Trump was the sixth most followed account on Twitter. While some would argue this ban is a breach of freedom of speech, the #NotOkay trend, and debate over Trump’s ban on entering the UK, shows that as a society we have constructed our own standards of what is unacceptable speech. Trump’s discourse also suggests that we are going back to ‘old’ racism where prejudicial discourse is not disguised, and the riots on Capitol Hill show the link between online hate speech and real-life events. Like prejudice, if populism is to be studied as something that is socially constructed and discursively performed, it requires the attention from scholars in order to understand the effects it has. Additionally, the devastating effects of events like Capitol Hill show us that we should also pay attention to populism perpetrated online.

Goodman, S., and Johnson, A. J. (2013). Strategies used by the Far Right to Counter Accusations of Racism. Critical Approaches to Discourse Analysis across Disciplines 6 (2), 97-113.

Guardian (2015, December 23rd). Can Donald Trump’s social media genius take him all the way to the White House? https://www.theguardian.com/technology/2015/dec/23/donald-trump-social-media-strategy-internet-republican-nomination-president