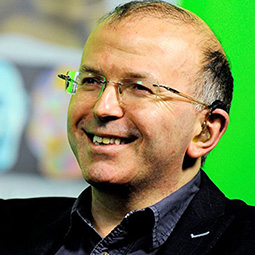 Renowned for his work on disability, Simon McKeown, Professor in the School of Arts & Creative Industries at Teesside University, has recently supported the Cinema of Ideas in bringing together a series of short films and talks on disability representation and accessibility in animation.

Simon was approached by Louise M. Milsom, a disabled freelance film curator, who asked if his work All for Claire could be showcased at the event. Louise has been researching the representation of physical disability in animation both on-screen and behind the camera. All for Claire is part of Louise’s Visibly Animated festival and a part of the BFI’s permanent collection. 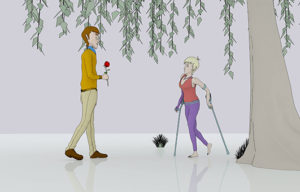 All for Claire tells the story of Lee, a young man determined to win the heart of Claire, a young woman determined to make life difficult for him. Dancing playfully on her crutches, Claire frustrates Lee’s romantic advances, transporting him away to daunting environments where he’ll need to think on his feet if he’s to win her affections.

Simon McKeown directed the film, working with actor Lee Soar and choreographer Claire Cunningham to create a colourful motion-capture animation which was first broadcast on BBC Big Screens across Britain in 2010. Simon explores themes of power, control and rejection in the work and originally created two versions with different endings for festival audiences to choose from – ‘win’ or ‘lose’?

Visibly Animated showcases a range of animated shorts from the UK, Germany, Australia and Taiwan, all centred around disabled characters which are available to view from 24th March to 6th April