The eutrophication (or excessive enrichment by nutrients as a result of human activities) of lowland lakes is a widespread problem globally but is particularly serious in densely populated areas of Europe and North America.

While the negative effects of nutrient enrichment are considerable in term of biodiversity loss and alterations in ecosystem functioning, one possible positive aspect is the increased rate of organic carbon burial. This means that regional carbon budgets may benefit from eutrophication, leading to a positive effect on climate regulation.

The possible climate regulating role of lakes as carbon sinks is only now being evaluated but to date there has been limited consideration of change in organic carbon burial rates in response to eutrophication.

A recently published study by Helen Bennion, one of the Lake BESS team, with John Anderson (Loughborough University) and Andy Lotter (Utrecht University) has revealed that the accumulation rates of organic carbon in many European lakes have increased by at least four to five fold over the last 100-150 years (Anderson et al., 2014).

This piece of research compiled data from about 90 European lakes and found background estimates of carbon burial ~ 5–10 g C m-2 yr–1 compared with an average rate of around 60 g C m-2 yr–1 for lakes subject to eutrophication in recent decades.

They show that the organic carbon burial rates for European eutrophic lakes reflect phosphorus availability – a pollutant coming for example from domestic waste waters and farming – and are considerably higher than previously thought. This has clear implications for our current estimates of regional carbon budgets and for the role lakes may play.

The authors suggest that enhanced organic carbon burial by lakes is one positive side-effect of the otherwise negative impact of the anthropogenic disruption of nutrient cycles: eutrophic lakes are sequestering more organic carbon than at any other time in their history.

Within the Lake BESS project, changes in organic carbon burial rates will be calculated for the study sites in the two lake regions to determine the role of these lakes as carbon sinks and hence in providing the important ecosystem service of climate regulation.

It has been a very busy summer and autumn for Lake BESS hence a reduction in post on this website. Lake BESS 2014 activities culminated in a meeting in UCL attended by most of us. We had a special guest, Geoff Philips, now honorary fellow at Stirling University, who is bringing exceptional expertise in water chemistry and in the functioning of the Broads system. He was also the only one of us remembering to take a picture! – thank you Geoff for coming and for sharing this picture: 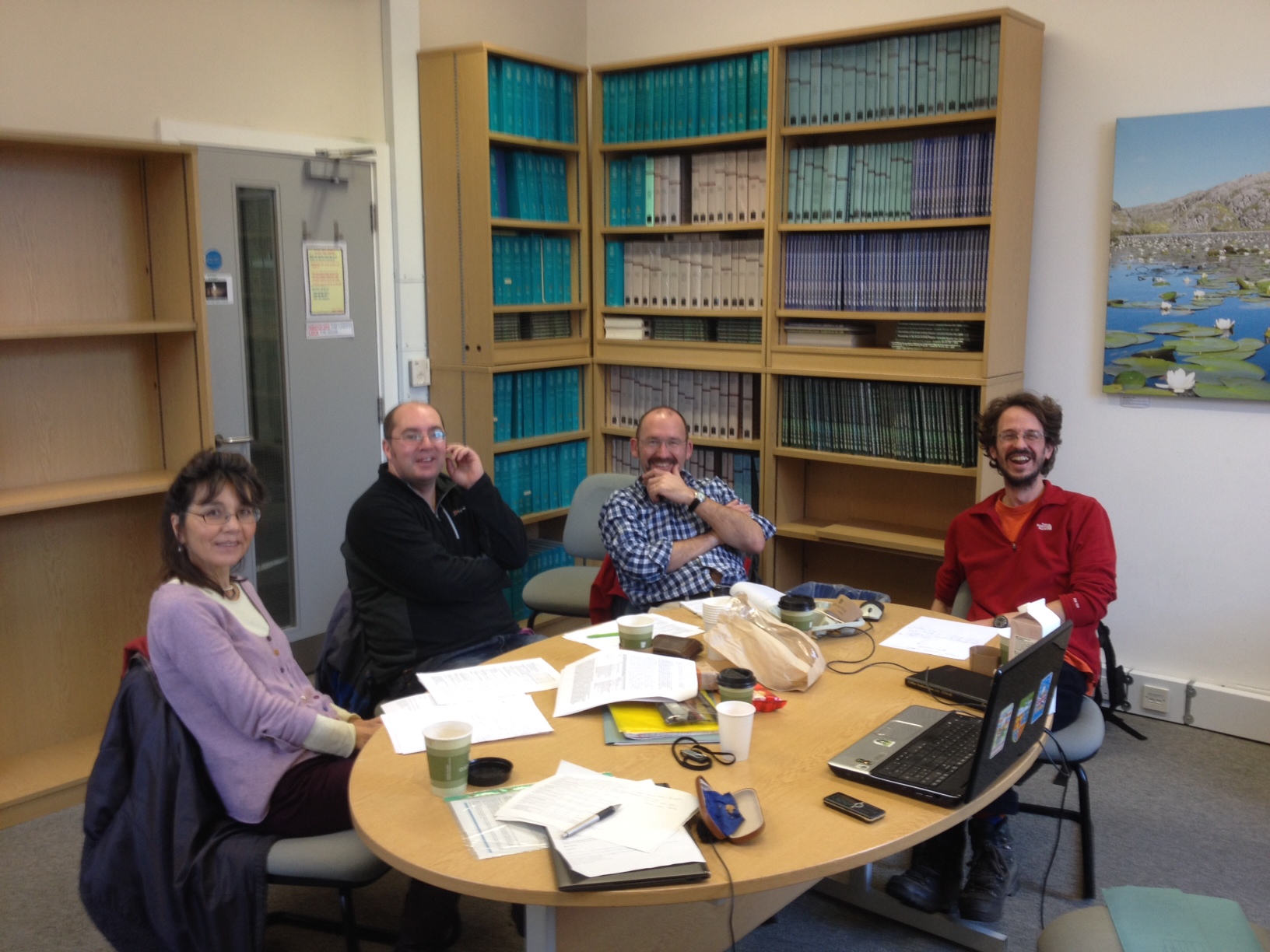 Last August, I was fortunate to be shown several ponds near Catcliffe and Treeton, East of Sheffield, UK, by Bob Croxton, form Sorby Natural History Society. The area is full of history and is a fascinating example of nature recovering following industrialisation. 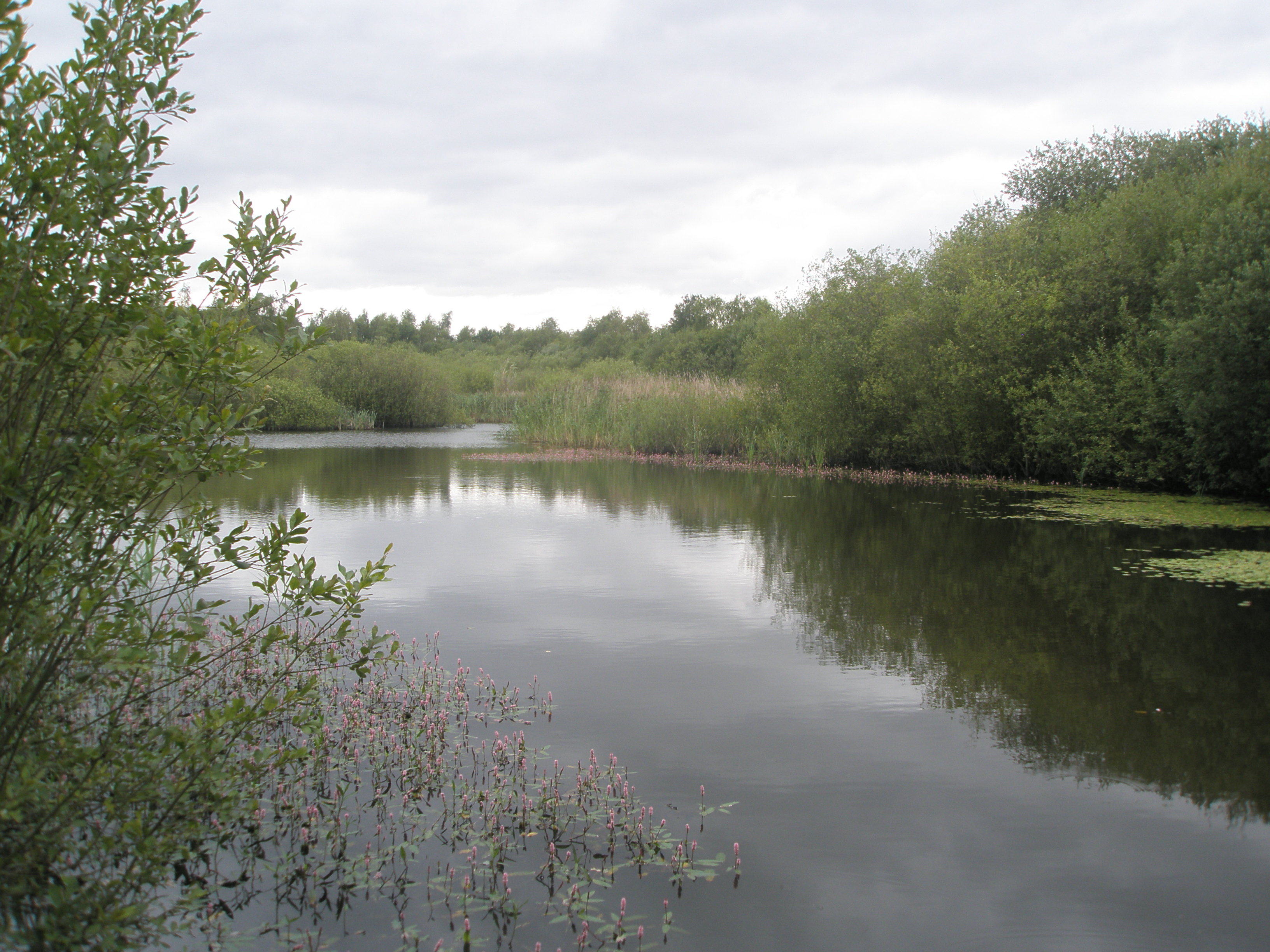 For instance, one of the ponds visited was formed in a lost piece of land amongst spoil heaps and three railway line! At this site Persicaria maculata and Nymphoides peltata were in full bloom (see picture) and two Potamogeton species were observed, now confirmed as P. pectinatus and P. pusillus. However only one shore was prospected and other nice aquatic plants are likely to be present in the rest of the pond.

On the whole, too many of the water bodies in the area were absolutely dominated by Elodea nuttallii, an invasive species that colonised the UK from the 1970s. It’s phenomenal spread in Britain and Ireland is summarised in a paper by Simpson that can be read from the BSBI archives. It remains unclear whether this spread has caused arm to aquatic biodiversity or whether it was simply facilitated by degraded habitats.