‘How do bryozoans travel?’ is one of the questions we are going to address within our project. Beth Okamura is telling more about this aspect of our work: 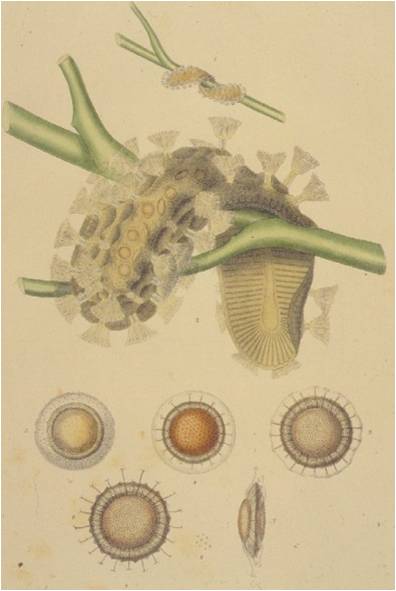 According to the Victorian naturalist George Allman , whose classic figure of Cristatella appears above, “a more interesting and beautiful animal than […] Cristatella mucedo can scarcely be imagined” (Allman 1856), an opinion that at least one of us adheres to – guess who! (ed. note: Beth is world-leading expert on Bryozoan, see her profile at the Natural History Museum).

Allman’s figure depicts a colony of Cristatella with various tentacular crowns (each about 1 mm) raised in filter feeding, the entire colony being drooped over and encircling aquatic vegetation. The figure also shows the spined statoblasts (also about 1 mm) in various developmental stages.

Statoblasts of Cristatella become attached to waterfowl (facilitated by their spines) and also, being buoyant, they initially float.

We aim to bolster our BESS project by examining relative levels of gene flow between Cristatella populations in sites associated with the Lough Erne and the Norfolk Broads systems, hypothesising that gene flow will be greater amongst sites in the more highly connected Lough Erne system.

The work is in collaboration with Hanna Hartikainen at ETH, Zurich.”

2 thoughts on “How do bryozoans travel?”